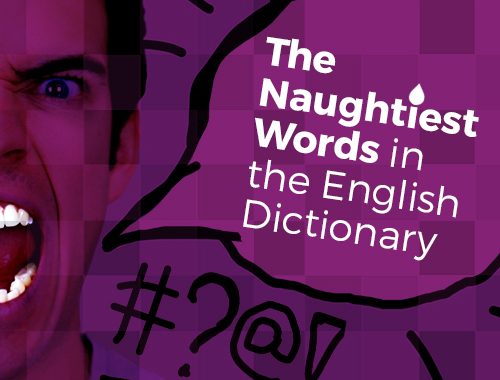 Naughty Words in the English Dictionary

For those expecting a long list of all the naughty words in the dictionary, I’m sorry to disappoint you. That could make an interesting infographic, but not a very good blog post. Instead I am going to analyse the existence of our naughtiest words and ask the following questions:

I’ll also delve into the history behind some of the dictionary’s naughtiest words and work out their origins.

What Makes a Naughty Word Naughty?

Most profanities carry some history with them. In many cases, the naughty words we know today were once completely innocent. Some swear words still serve a normal purpose even today – like a garden hoe. When your Dad is out in the garden with his hoe, just make sure he is gardening! There is a certain word that dates back over 1,000 years. The Anglo-Saxons wrote this word as ‘scittan’ and used it as reference to cattle diarrhoea. It’s not hard to figure out what the word is in today’s language.

How did it become such a ‘bad’ word though? I guess it’s just a natural transition and the most obvious example to describe something – well – shitty. It’s just natural comparison satisfying the need for lexis. Cattle diarrhoea is pretty terrible. So is stubbing your toe. And the England football team. It’s all scittan! A lot of swear words have history that prove they once described something innocent but unfavourable or nasty. Think of a female dog! Natural language progression has meant these words are now more commonly known for describing literally anything unfavourable or in a nasty fashion.

There are several publications out there that go into more detail on the history of swear words. ‘Holy Sh*t: A Brief History of Swearing’ by Melissa Mohr is a great example.

How Do Naughty Words Become Accepted?

As mentioned above, a lot of naughty words have a legitimate and innocent reason for inclusion in the English Dictionary. However, on some occasions the Dictionary takes on board some rather naughty words that have never been clean! Back in 2014 the Oxford English Dictionary added four insulting derivatives of the C word to its book. (Read more about that here). Why on earth would the OED allow such profanity?

Well in truth, the OED does not have much choice. The OED is updated on a quarterly basis and has been since the year 2000. These alterations are necessary to offer a reliable catalogue on the lexis of modern times. It is the duty of the OED to showcase changes in language and the evolution of our language is constant. If a word exists and is in use, both verbally and in written language, then the OED must consider its inclusion; regardless of meaning. How else will we explain what it means?

Anything But THAT One

In truth, for most adults there are only a handful of curse words that are deemed extremely naughty and therefore forbidden. A certain C word springs to mind amongst a few others. It’s funny how that one is so terrible, isn’t it? Like, why that one over all the others? It feels wrong just thinking about saying it.

All other ‘naughty’ words you can think of occur in our everyday language if you think about it. The music we listen to; the films we watch; the comedians we adore – obscenities are a part of life. They are extremely satisfying sometimes too. What else are you supposed to yell when you hit your thumb with a hammer? And in traffic? And what other name could we give John Terry? We need swear words!

The custom of forbidding the use of such language is mainly for reasons surrounding children and young ones. We don’t want our children swearing and in many respects, that is fair enough. In society it is deemed ill-mannered and disrespectful to curse out loud, especially for a child. That is the language limiter we have set ourselves. For this reason, if your child says the F word out loud, you’re more than likely to give them a telling off. But if they say the word ‘bubble’ out loud everything is fine. In these circumstances, the child recognises that ‘bubble’ is fine and the F word is naughty. But only after the telling off. The child has no understanding of the gravitas of the F word pre-punishment.

It’s interesting when you think about it like that. When your child then goes through the terrible teen stage and deliberately wishes to show rebellion in the form of spoken language, which word will they choose? Bubble or the F word? It will of course be the latter, but why? Because it is naughty or because you have forbidden the use of that word? The gravitas of this word online applies because of your punishment whenever it was used when your child was growing up. Without the punishment, the word carries no more weight than any other and therefore becomes just a word. Just a word. Imagine that. A world where we didn’t cringe at a child swearing because it isn’t a swear word; it’s just a word. It’s only naughty because we label it as naughty.

We Love Them All!

At Content Juice we show no discrimination when it comes to words – we love them all! Obviously, we’re not going to throw a load of swear words in your content, we understand the rules! But when it comes to written language and the history of lexis, we love the F word, the D word and the X, Y and Z words too! What words can we put together for you? Tell us here.