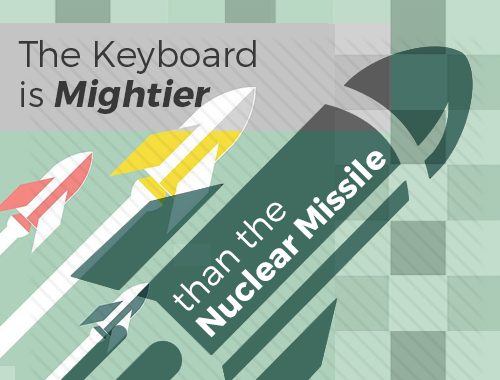 The Keyboard is Mightier Than the Nuclear Missile

Way back in the seventh century BC, the well-known Assyrian sage Ahiquar is reputed to have stated “the word is mightier than the sword”. Okay, so Ahiquar maybe isn’t that well known today and the version of his wisdom that we are more familiar with is the nineteenth century one; which was coined by the equally not-well-known author Edward Bulwer-Lytton.

For more than two thousand years the saying has, arguably, held sway. However, today we have some updated versions of swords, which can do a bit more damage than a quick thrust and parry.  So does the saying still hold true, or does the power of thermonuclear weaponry beat the pen once and for all?

Let’s start with some facts and figures; nukes versus pens. Nuclear weapons have only been used twice, in anger, creating a neat, if not particularly pleasant, full-stop to the Second World War. The casualty figures from the bombings of Nagasaki and Hiroshima are hard to pin down. Estimates put the numbers somewhere in the region of a couple of hundred thousand. Google the question and you’ll get a ball-park figure, at least.  However, when it comes to our old friend/foe, the pen, the death tally is harder to establish.

Taking just one small example of how much damage a pen-wielding maniac/religious reformer can do can give us an idea of the lethal potential of the pen. In 1517 Martin Luther took up a pen – possibly a quill, I’m not clear on that one – and penned his ninety-five theses. Not content with that he then pinned them to the door of All Saints’ Church in Wittenberg – in those days ‘posting’ your thoughts was a less virtual act.

The resulting carnage was so massive – continuing to this day – that even Google can’t come up with a figure for “deaths caused by the reformation”. Admittedly, the countless fatalities Luther inadvertently caused took a bit longer to achieve than the American bombing of Japan but still, over the centuries, the word and associated pen have worked their deadly magic.

The Power Behind the Pen

However, the reformation and the bombing of Japan are history, literally. Today most of us (not all, I have to admit) have ditched the pen in favour of the keyboard and/or the touch screen. Does the power of the written, typed or tapped word still have any relevance today? Our old friends Ahiquar and Bulwer-Lytton weren’t, in reality, talking about what a pen or word could achieve on its own.  You can only do so much damage with a pen after all, before being physically restrained.

Ultimately, it’s the action behind writing, thinking, that is really responsible for the power of both the written and spoken word.  In the right minds those thoughts and words can do incredible good, in the wrong, well, we haven’t looked at Hitler yet, so let’s not bother. Still, his ideas, spoken and written, did more damage than any nuke to date.

If, however, pens and even keyboards are now more or less obsolete, where does this leave those thoughts and ideas?  Where exactly has the conversation gone? Oh yes, online. Social media, whilst being devoid of pens, is the place to be if you want to express yourself, change the world or spark a major nuclear confrontation. Several, read all, world leaders know that!

The ‘written’ word may now be largely digital but today the written word is even more ubiquitous than it ever was before. Literacy levels are higher across the globe than they’ve ever been and individual’s access to those words is also greater than ever before.

One world leader in particular has, of late, demonstrated the power that the penned, written, typed or tweeted word can have. As yet, the leader of the free world hasn’t reached for the nuclear button and nuked North Korea, but he can barely keep his hands off his twitter account. Admittedly some of those tweets can be cryptic and/or nonsensical but, importantly, Trump uses the power of the written word to entrench his world view in the minds of his supporters.

On the rare occasion that he makes a misjudged political move, and it gets reported by the world media, all Trump needs to do is brand it as ‘fake news’ on twitter and, as if by magic, it ceases to be real – for millions of people at least!

Trump isn’t alone on the global stage in taking the political conversation online. Since its inception most world leaders have taken to the social networking nirvana that is Twitter. Many regimes tightly control access to social media platforms and/or the internet, demonstrating a fear of the written/spoken word that is probably as old as language itself.

Whilst President Trump could nuke a country or two if he gets out of bed on the wrong side (well, probably) he still prefers to use that oldest of weapons, thought control. The pen, the keyboard, the touch screen, I think, remain the mightiest weapons of all!

You've just read a blog created by Tim Bedford. Tim is one the most creative and imaginative content writers you're ever likely to meet; we're extremely grateful to have him as an associate here at Content Juice!